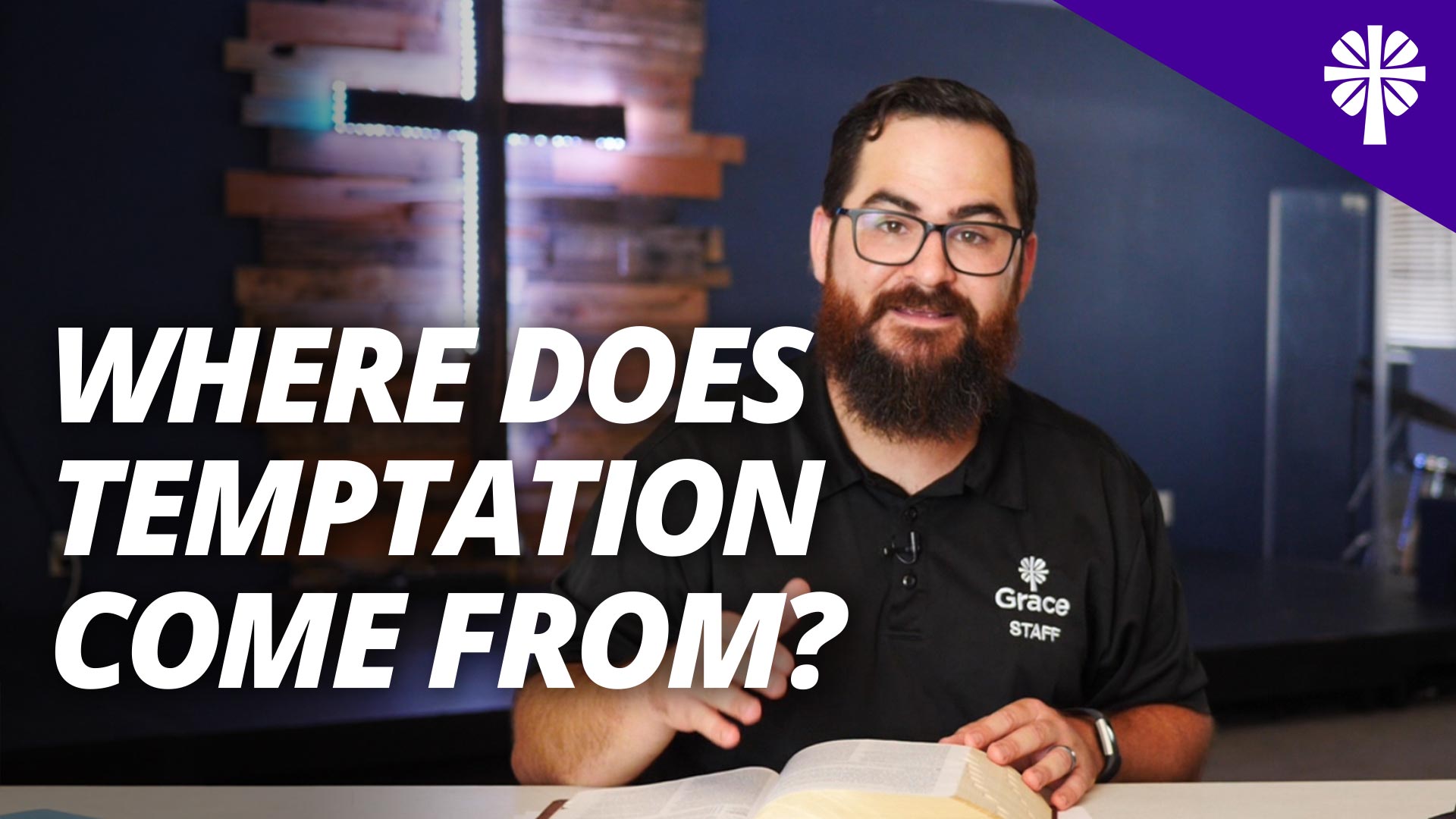 I’ve never been very good at self-discipline. It’s not that I can’t do hard things, because I love to take on new challenges. The part that is hard for me is resisting temptation. Because do you know what sounds really good on the second day of a diet? Cookies. And do you know what sounds like fun when it’s time to clean the garage? Baking a new batch of cookies. And when it’s time to begin work on that big project, what’s really enticing is just picking up my phone and zoning out, “just for a little while.”

If I’m honest, it’s because I’m seeking comfort. Whenever there is something uncomfortable or uniquely difficult, my mind immediately starts wandering to something that will make me feel good. You get that, don’t you? You’re probably sitting somewhere comfortable right now! It’s pretty natural for us to want comfort.

But do you know when I want comfort the most? I feel the biggest desires for comfort when I feel like I’m under some sort of trial, or when my patience is being tested…when I’m being squeezed on all sides. That’s when I go to my phone, or when my mind starts to wander towards lust, or when I want nothing more than salty chips and a sugary drink.

The truth is that you know and I know that we’ve all been under pretty extreme stress and pressure lately. There’s constant bad news in the media, many of us are separated from our friends and families, and it’s impossible to know what will happen next. What do we do when we’re in the midst of such big trials?

Whether you’ve been following Jesus your whole life, or if you’re in a season of doubt and aren’t sure what you believe about God right now, there’s good news for you today: God says you’re blessed right now. Don’t worry, I’ll explain.

We’ve been beginning to orient ourselves to the book of James, and he starts out with the strong statement that we are to consider it “joy” when we face trials and temptations. Then he talks about wisdom and moves on to talk about how money and status are fleeting. At this point, we think he might be spouting off a bunch of proverbial statements that have a hidden meaning, or look nice when stitched onto a pillow. But then he returns to the topic of trials, and this is where our good news comes:

“Blessed is the one who perseveres under trial because, having stood the test, that person will receive the crown of life that the Lord has promised to those who love him.” (v12)

James here is channeling the same language his brother used when preaching the Sermon on the Mount. Jesus said “Blessed are the poor in spirit, blessed are those who mourn, blessed are the meek, blessed are the merciful, blessed are the persecuted…” And on and on. James is using the same word, “blessed,” to describe those who perservere under trial. Blessed means to be a recipient of God’s favor. James is reminding his readers, who are scattered out, separated from their community and under pressure from the culture around them… Doesn’t that sound like us? He’s reminding them that even when life feels like a big trial, an impossible season of testing, God is with us and has promised something at the end of it: life. Eternal, abundant, flourishing life.

This is James’ bookend to the conversation he started back in verse 2, and he’s driving home the point that outward circumstances don’t matter as much as being connected to God, because that’s what makes us blessed, even if we’re in the midst of trial.

But even then, that doesn’t change the fact that we’re currently in a trial. And it’s hard. And it’s making us ask some hard questions. And James seems to know exactly what we’re thinking because he continues:

Did you see that? WHEN tempted. Notice that he doesn’t say “if.” James knows that temptation will happen to all of us, but he wants to make sure we don’t blame it on the wrong person.

We know from other places in Scripture that God will TEST his people for their good (Prov 3:11-12; Hebrews 12:7-11), but we can’t assume that God tempts us to turn away from him. These are two different words: test, and temptation. A test (or a trial) is something that is to be endured, but as James is going to make clear, a temptation is something that is to be avoided.

But according to James, the brother of Jesus, God may test us, but he does not and cannot and will not tempt us to turn away from him.

And so, if it’s not God tempting us, where does the temptation come from? And should we avoid it, or is it okay to give in every once in a while, you know, to let off some steam?

James makes it pretty clear that it’s NOT God that’s tempting me, and it’s not Satan…it’s ME.

“but each person is tempted when they are dragged away by their own evil desire and enticed. Then, after desire has conceived, it gives birth to sin; and sin, when it is full-grown, gives birth to death.” (vv14-15)

Dragged away and enticed. The word for enticed could also be translated “lured.” And James is intentionally using a fishing metaphor here to describe what happens with our desires and giving in to temptation.

If you’ve ever been fishing, you know that fish don’t usually bite down on empty hooks for no reason. If you want to lure and entice a fish, you’ve got to hide the hook. You’ve got to cover it with something attractive.

Temptation does that. It appeals to our desires, attracts us, but hides the fact that it’s dangerous. You’ve been there, right? Where you convince yourself something is okay?

“Just ten minutes on this website. No one has to know…”

Something inside us is being drawn away to something attractive. We’re being enticed, but we don’t know what is hidden inside it. A hook. A snare. And once we’re hooked, even if we try to struggle, we begin to get dragged away.

God has promised life, but sin promises death. That’s what comes at the end of the process.

It all starts with DECEPTION. We convince ourselves to believe something that isn’t true. Something like how we’ll find comfort in that thing that’s tempting us. Or we don’t believe something about God, like disbelieving that he will provide for us, so we begin to look elsewhere. Adam and Eve experienced this unbelief when the serpent asked them, “Did God really say, ‘You can’t eat from any tree in the garden?”

Then comes DESIRE. We see the lure. We get enticed. Our interest is aroused. Temptation lines up with our desires. It attracts us, but it hides the fact that it will kill us. This is what drives people to pornography or a physical affair. This is what drives employees to dishonesty. This is what leads people back to the addiction that they are hiding from their family. It starts with disordered thoughts, when we put other things as more important than our relationship with God, which leads to disordered desires, where we seek out other things besides God to satisfy us. Desire like that conceives in our heart, and gives birth to sin.

This leads to DISOBEDIENCE, when we act on those evil desires.

Jesus promised us that we will have trials in our lives (John 16:33). We know that we constantly face trials and tests, especially right now. But, we don’t have to choose death. Because of Jesus, we now get a choice! That’s good news!

You don’t have to give in to temptation. You can run to Jesus. And it’s not like you need to muster up the power to turn to him, if you’re in a trial and experiencing temptation, you’re blessed because Jesus is right there with you! And he’s already given you his perfect righteousness and freed you from slavery to sin so that you actually get a choice in the matter and can turn to him and ask for help!

One of the most famous passages on temptation is 1 Cor. 10:13, which says, “God is faithful; he will not let you be tempted beyond what you can bear. But when you are tempted, he will also provide a way out so that you can endure it.”

Because of Jesus there’s always a way out! And so, what does that mean for you?

Listen, if you forget everything else I’ve said today, I want you to hear this: “Whatever sin you’re flirting with, run away from it.”

But James isn’t finished. He says, “no, God doesn’t tempt you to turn away from Him. That’s not from God. But do you know what is from God?”

“Every good and perfect gift is from above, coming down from the Father of the heavenly lights, who does not change like shifting shadows. He chose to give us birth through the word of truth, that we might be a kind of firstfruits of all he created.” (vv17-18)

God gives good gifts. Perfect gifts. Gifts that give life. Gifts that are even better than a beautiful sunshine-y day, or a dark night with a million stars, because God is actually the Father and Creator of the sun and the stars, and he’s not subject to bad weather or daylight savings time or smog.

Temptation gives birth to sin and death, but God gives us birth into LIFE through his truthfulness. Not just for our own sake, but for the sake of all the world. God in Jesus saves us from sin, gives us his righteousness as our own, and calls us into his mission of restoration…as a PREVIEW of what he’s continuing to do for all that he created!

That’s what the first fruits are. They’re the first crop, given as an indication of what else is to come. It’s that incredible smell that wafts from the kitchen that promises a delicious meal is coming. It’s that first impression of someone where you get to know what kind of great friend they will be based on how kindly they treat you when they meet you.

That’s what we are. We’re the first fruits of what it looks like to have God present with us, proclaiming his blessing over us, even if we’re in a trial, even if we’re facing testing. God has promised to be with us, not just for us, but for the sake of the world.

God is presenting us as the foretaste, the down payment, of the redemptive work he’s doing for all creation. We get to display truth, love, and generosity to the world as a sign of Jesus who freed us from sin and death, because God is offering the same freedom to everyone, even as he’s still working in us.

That’s what James is reminding us: You were created by God with the full potential for truth and life, so don’t squander or trade that for a false lure. You don’t have to. Because of Jesus, we can remember that even in the midst of trial, God is still trustworthy and good, and he’s present with us and working in us for the sake of the world. That’s good news.